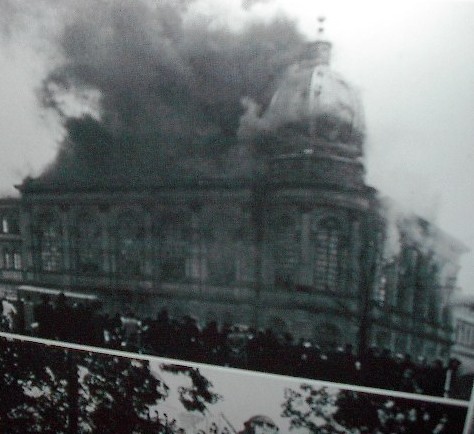 On the night of November 9, 1938, violent anti-Jewish demonstrations broke out across Germany, Austria, and the Sudetenland region of Czechoslovakia. Nazi officials justified the riots as a “spontaneous” reaction to the murder of Ernst vom Rath, who had been shot by Herschel Grynszpan, a 17-year-old Polish Jew distraught over the deportation of his family from Germany to Poland.

Over the next 48 hours, violent mobs, incited by Nazi officials, destroyed hundreds of synagogues, and desecrated Torah scrolls, sacred texts, and religious objects. Acting on order from Gestapo headquarters, police officers and firefighters did nothing to prevent the destruction. Approximately 7,500 Jewish-owned businesses, homes, and institutions were plundered, and 91 Jews were murdered. An additional 30,000 Jewish men were arrested and sent to concentration camps. Nazi officials held the Jews responsible for the riots, and a fine of one billion reichsmarks (about $400 million at 1938 rates) was imposed on the German Jewish community.

The Nazis euphemistically called the event Kristallnacht (“The Night of Broken Glass”), referring to the thousands of shattered windows that littered the streets. Kristallnacht was a turning point in the history of the Third Reich, marking a shift from antisemitic legislation to the violent, aggressive anti-Jewish measures that would culminate with the Holocaust.

Ironically, one positive outcome of this horrific event was that it removed any illusion that the situation for the Jews would somehow improve. After Kristallnacht, Jews sought refuge wherever they could find it. Parents send their children to safety, hoping they would later be reunited. Others found ways to travel to places that they would have never considered before, like Shanghai.

A number of St. Louis Holocaust Survivors witness the destruction and horror of Kristallnacht first-hand. Visit our Oral History Project to listen to their powerful testimonies about the arrest of family members, businesses under attack, and places of worship consumed in flames.