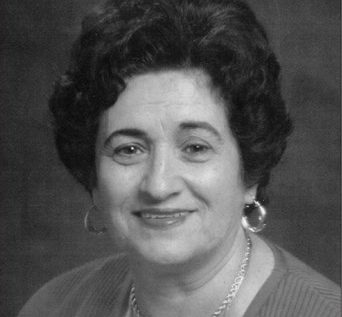 Frieda Reinstein was born on June 25, 1923 in Oswiecim, Poland (later renamed Auschwitz by the Germans). She was the third of four children born into an Orthodox Jewish family. All holidays were celebrated, and she attended both public and Hebrew schools. She was in high school when the Nazis invaded Poland and was forced to stop attending school. Her father and brothers were taken for slave labor, and little by little the family and others realized the Nazis’ plans for them.

All Jews were expelled from Oswiecim in 1940. The family was sent to the Bedzin-Sosnowiec ghetto. Mrs. Reinstein was separated from her parents upon liquidation of the ghetto. She was sent to the consolidated ghetto at Srodula and Kamionka, where she worked in a factory sewing uniforms. She found out that her brother was in a concentration camp, Calay, and she was smuggled out of the ghetto to join him there. It was a relatively open camp, and while there she worked in the fields. After six months, Mrs. Reinstein was separated from her brother and sent first to Buchenwald, then to Neusatz, a slave labor camp.

Conditions were harsh. Starvation and illness were common, and the work was very dangerous. Mrs. Reinstein eventually was taken, with approximately 1,000 other girls, on a death march to Bergen-Belsen. During this march, she separated herself from the group and spent the night in a local couple’s home. In the morning, she realized their Nazi affiliation and was taken by the man back to the group. Mrs. Reinstein remained in Bergen-Belsen until the camp’s liberation by the British in May 1945.

After liberation, Mrs. Reinstein remained in the displaced persons camp in Bergen-Belsen, where she received treatment for typhus. After finding out that one brother survived the war, she went to join him in the displaced persons camp at Feldafing, Germany. There she met and married Alex Reinstein in 1945. Their first son was born in Germany. They applied for visas to go elsewhere, and eventually were able to come to the United States. They arrived in St. Louis in 1949 and later had two more children and four grandchildren.

Mrs. Reinstein’s one surviving brother died a year after liberation. All other immediate and extended family members died in the Holocaust.

Click on the location markers to learn more about Frieda. Use the timeline below the map or the left and right keys on your keyboard to explore chronologically. In some cases the dates below were estimated based on the oral histories.