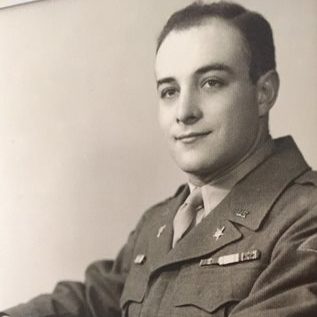 Harold Abrams was a Jewish soldier in the 4th Armored Division in Patton’s 3rd Army, which landed in England in January 1944.

The extent of his experience was on about April 4, 1945. They captured North Stalag III, a concentration camp on the north outskirts of Ohrdruf, Germany.

Somewhere between North Stalag III and Chemnitz, he found some young women who had been used for slave laborers in munitions camps.

Click on the location markers to learn more about Harold. Use the timeline below the map or the left and right keys on your keyboard to explore chronologically. In some cases the dates below were estimated based on the oral histories.

Start Harold's Timeline
“[The war] made me realize that you have to live each day as you never know what's going to happen the next day, to make each day more worthwhile, to look at each day with more value than you did before.” - Harold Abrams