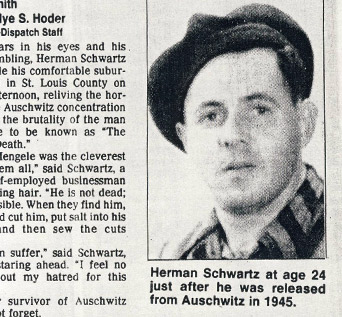 Herman Schwartz (born Chaim Schwartzwald) was born November 12, 1921, near Frankfurt, Germany. He was raised in Plonsk, Poland. Before the war, he completed two years of professional school and during the war, a “slave”. For five months in 1940, Herman lived in the Plonsk Ghetto. From May 1940 to May 1942, Mr. Schwartz in the Gralewo Labor Camp. 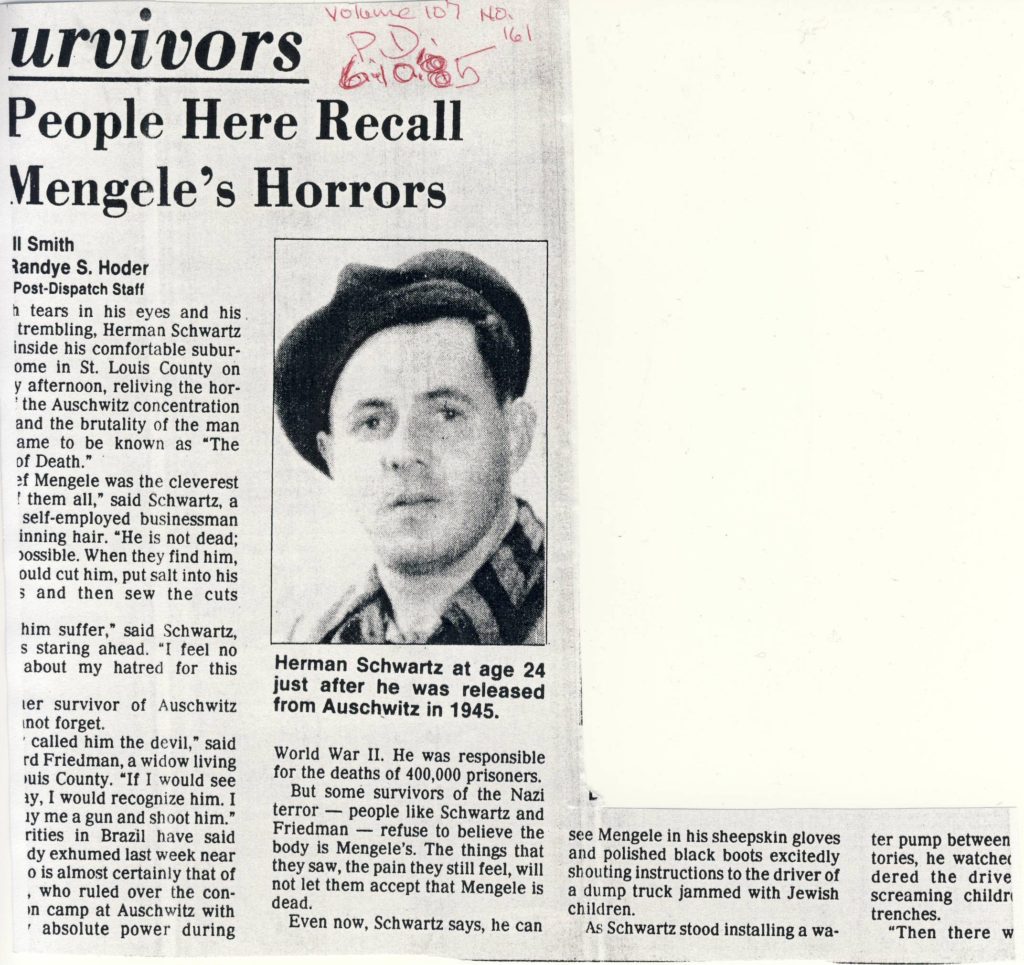 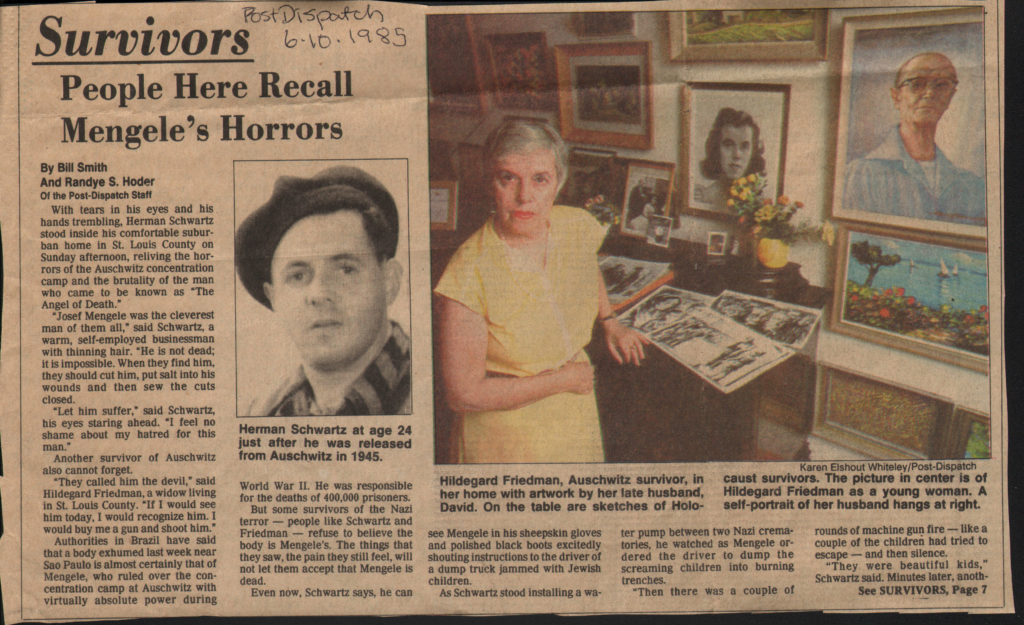 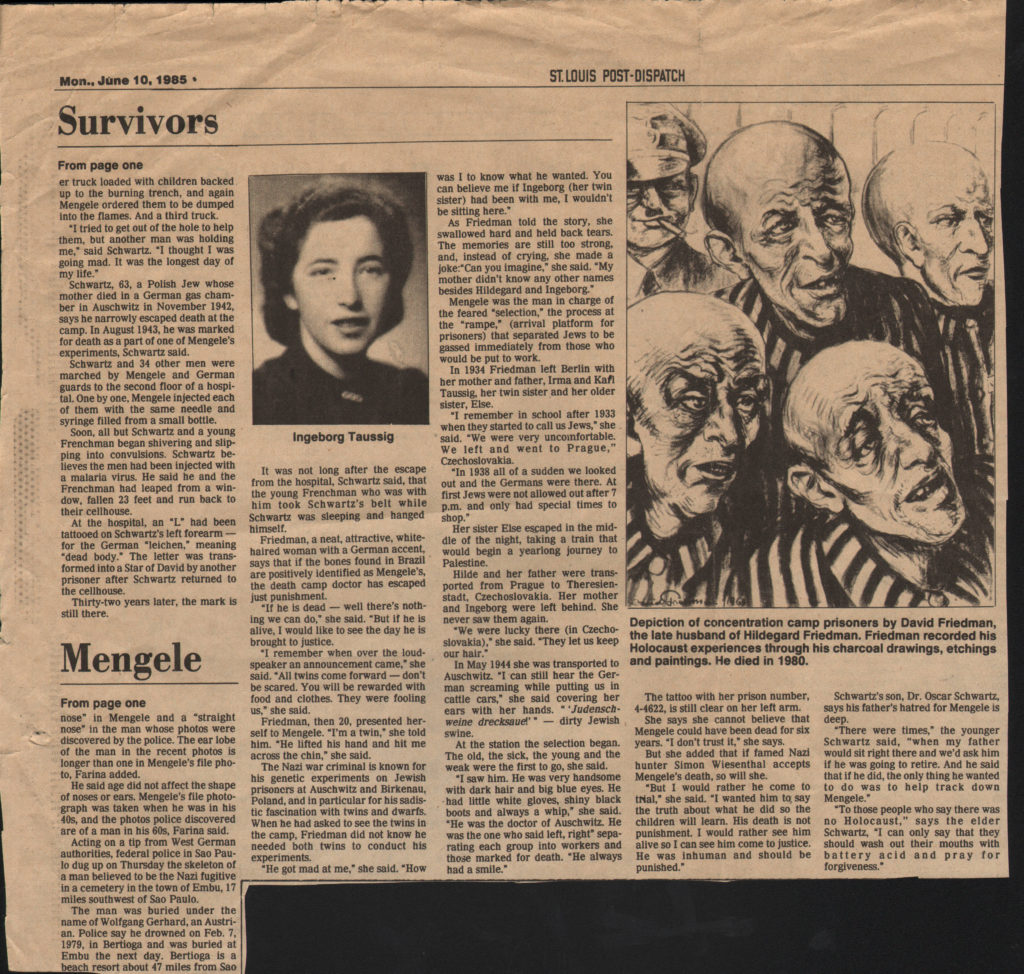 Click on the location markers to learn more about Herman. Use the timeline below the map or the left and right keys on your keyboard to explore chronologically. In some cases the dates below were estimated based on the oral histories.

Start Herman's Timeline
“[On May 1, 1945] all of a sudden I feel, I see, I hear doggone something is rumbling, the tanks. I says, I start wavin’ with the hand and finally the tank’s passin’ me by. And I was surprised with the first tank, what its number was, 874. This was my number when I went into Grajevo, to the first camp. And he liberated me. The boys jumped down and they gave me a cigarette. They says, 'Man, don’t worry about a thing now. You’re a free man now. We’re chasing the Germans now,' he says.” - Herman Schwartz

PERRY: This is Tape Five, Side B.  The narrator is Herman Schwartz, the interviewer Eli Perry, it’s 2-24-85.
Herman, before you mentioned that songs were composed in the camps.  Could you tell me more about that?
SCHWARTZ: Well, we had in Auschwitz the biggest lyricists, composers, songwriters, originally came out from Poland.  And from Poland they went to Brussels, to Paris, and they went to all these other places, I believe for more money, for a better life for them.  I know one particular name; his name was Menzell. He used to be in the Skala Theatre in Warsaw before the war.
PERRY: The Skala?
SCHWARTZ: Yeah, the Skala Theatre.  And Sundays, and after the appell was 12 o’clock, and after we got the dinner, we – many of them – we congregate outside, or the weather was bad, it was right there between the bunks in the block.  Sometimes by mine bed, sometimes somebody…Those guys can compose a song so fast.
PERRY: Very talented.
SCHWARTZ: Talented people.  They had those people, well Mengele took them all away.  But they left a few songs I still remember.
PERRY: Could you sing some of them?
SCHWARTZ: One is – one is called, “_____________” in Jewish.
PERRY: Yes.
SCHWARTZ: (SINGS SONG IN YIDDISH)
Translation: The man is young; your aspirations are great
And you are looking for luck
Abandoned, forgotten is your home, your nest
Luck doesn’t return
And when old age clutches you, then do you remember
If luck did happen this way
You wander around homeless and
You need very little when I had my poor home
I want to see my home again
Where everything is was as before
There the stream, there the house
The alley also reminds me
I want to go home
My home did they burn
My home have they destroyed
Did luck happen once this way?
I wander homeless
I would not complain about every necessity
If I had my poor home again
I hear someone singing yesterday’s echo
My mother held and rocked me in her lap
How much love, how much beauty
In my mother’s poor home
I want to go home.
PERRY: Herman, you mentioned that they also composed other songs about other times too.
SCHWARTZ: That’s right.  They put up songs like every calamity what befell the Jewish people through the ages, like the Spanish In…
PERRY: Inquisition.
SCHWARTZ: Inquisition.  So one guy, in a short time he put together a little love song, a little love song was it.  They call it, “Toledo.”
PERRY: “Toledo,” like the city.
SCHWARTZ: Yeah, and I will sing it. (SINGS SONG IN YIDDISH)
Translation for “Toledo” by Mendele:
On a street in Toledo, I will not forget the street.
Sits a girl – oh, one in moreno, you are beautiful.  Your eyes – deep as oceans; your eyes inflame deeply.
I hear someone singing a love song.  Oh, moreno, your voice rings that night in
Toledo.  Oh, you are beautiful, moreno.  Your voice rings that night in Toledo.
You are pretty, oh moreno; your voice rings that night in Toledo.  You are beautiful moreno.
PERRY: You said that there were even other songs and people had built up their own intellectual life and society.  And there was even a man who sang a song about –
SCHWARTZ: Hanukkah.
PERRY: About Hanukkah.  Can you remember that one?
SCHWARTZ: Well, I’m gonna tryin’.  (SINGS SONG IN YIDDISH)
Translation for “Hanukkah Song,” by Mendele:
Oy, you lovely lights
You tell precious stories
Tales, tales without end.
Jew, you have fought once
Jew, you fight today
Jew, you fight today.
Oh, you lovely lights
You have told precious stories
Tales, tales without end.
Jew, you have conquered once
Jew, you have conqured once
Jew, you have conquered, also, today.
PERRY: This concludes the interview and the narration by Herman Schwartz.