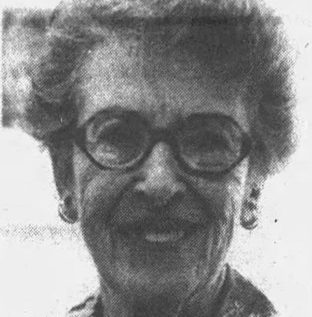 Ilse Mansbacher (Hochheimer) was born in Duesseldorf, Germany in 1908. She married Kurt Mansbacher, a physician, in 1930. Because her husband was not a German World War I veteran, he was unable to seek non-Jewish patients who were part of the German insurance system. Unable to make a living, the couple emigrated to the United States in 1934 and settled in St. Louis.

They became very active in the St. Louis Jewish community. Mrs. Mansbacher worked for the St. Louis Committee for Service to Immigrants, separate from the Jewish Social Service Bureau, which was funded by the Jewish Federation. She worked in different capacities as a secretary and translator for newly arrived Jewish immigrants. She worked with both those who came before the war started and also the large influx of immigrants who came to St. Louis after 1945.

Click on the location markers to learn more about Ilse. Use the timeline below the map or the left and right keys on your keyboard to explore chronologically. In some cases the dates below were estimated based on the oral histories.

Start Ilse's Timeline
“But 90% of the post-war immigration was Eastern European. And they are the ones who needed tremendous amounts help – financially and emotionally. What they had suffered emotionally is unspeakable and this is where I really felt I helped.” - Ilse Mansbacher