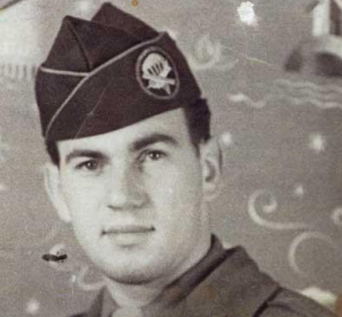 Isadore (Bud) Rosen was born on January 8, 1923, and grew up in St. Louis. Bud graduated from Soldan High School in 1941. During World War II, Isadore (Bud) Rosen was with the 86th Infantry Division and also with the 1st Allied Airborne Army. He was overseas in 1944 and 1945 serving in England, France, Belgium, Germany and to the Berlin occupation. He was torpedoed in the English Channel in December 1944 during the Battle of the Bulge. He was wounded and rescued.

After the war, Mr. Rosen was in Berlin and received a letter from St. Louisan Anna Dien. She was requesting his help to deliver boxes of foodstuff to a man living in the Russian zone who had survived Auschwitz. Word quickly spread about Mrs. Dien’s GI friend in Berlin helping concentration camp survivors.

Isadore (Bud) Rosen started receiving many pleading letters followed by food packages from people all over the United States trying to get food to loved ones in all zones of occupation.

Click on the location markers to learn more about Isadore. Use the timeline below the map or the left and right keys on your keyboard to explore chronologically. In some cases the dates below were estimated based on the oral histories.