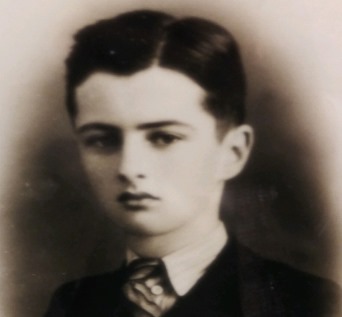 Nationality: Hungarian
Location: Austria • Gunskirchen Concentration Camp • Mauthausen
Experience During Holocaust: Family or Person in Hiding • Forced on a Death March • Liberated • Participated in Investigation of War Criminals • Sent to Concentration Camp • Suffered from Disease • Was a Forced Laborer
Back to All Stories

Leslie Ilies was born in Budapest, Hungary in 1922. He considers his family as secular. They only observed Rosh Hashanah (the Jewish New Year) and Yom Kippur (Day of Atonement) among the Jewish holidays. Leslie was sent to a boarding school in Switzerland, and later on he and his mother moved to Romania, where Leslie’s uncle lived. Leslie received his high school diploma there in 1940. By this time, there were quotas against Jewish people and he could not enter the university in Romania. He went back to Hungary, but he could not go to college there either. He learned photography and  worked for a photographer in Budapest between 1941 and 1943.

In 1943, he was taken to a forced labor camp in Komaron, a town 50 miles northwest from Budapest. Later he was sent to Transylvania. By Leslie’s description, “the barracks were clean and the food was decent,” however insults and beatings occurred frequently.

In the fall of 1944, the prisoners were put on trains and sent to Austria. First they worked in a small village near the Hungarian-Austrian border digging anti-tank trenches. They were supervised by German SS troops, and the conditions were very bad by this time. They lived in stables without heating, and people died frequently from diseases such as typhus.

In November, they marched to Deutschaltenburg, a small town near Vienna, Austria, and then they were put on barges and shipped to Mauthausen, a concentration camp near Linz. It was a six day trip without any food or water. After arriving, Leslie was put to work in the infamous Mauthausen stone quarry. Thousands of people died here of starvation, exhaustion, and illness. After a few weeks, he was sent to work on a railroad in Linz, and this saved him.

As the Russian Army was approaching in February 1945, the Germans evacuated the camp and the inmates were marched to Gunskirchen, Austria. Leslie describes it as a “death march.” It lasted five or six days in bitter cold weather. During the trip, they were only given one piece of bread. Hundreds of people died on the road. Everybody who could not walk anymore was shot.

Leslie stayed in the camp in Gunskirchen until May 4, 1945, when the Germans fled. Leslie was hospitalized and then worked as an interpreter for the U.S. military government. A few months later he went back to Romania to look for his mother. She had managed to survive the war in Romania. Leslie got married and stayed in Romania until 1965, when he came to the United States with his wife and daughter. Unfortunately, his wife died of cancer a year after coming to the U.S., and Leslie raised their daughter alone. At the time of the interview, Leslie had retired from his job and was living in St. Louis near his daughter and grandchildren.

Click on the location markers to learn more about Leslie. Use the timeline below the map or the left and right keys on your keyboard to explore chronologically. In some cases the dates below were estimated based on the oral histories.

Start Leslie's Timeline
“We were dirty... we were not fed or we were fed very badly, so many people – when I say “many,” it was not hundreds, but dozens – were dying of exposure and typhus and diarrhea, but not on a very large scale. It still was an event when somebody died, not like later on in Mauthausen when nobody gave a damn if somebody died because everywhere, everyday there were hundreds of people who were dying. You couldn’t just get upset for everybody unless it was something very close to you.” - Leslie Ilies