Ludwig Scheinbrum, the son of Alexander and Rosa Scheinbrum, was born on June 29, 1910 in Vienna, Austria. He completed high school and Business College before the war. He was in Stein-in-d.-Donan Labor camp in Austria from February 12, 1934 to December 24, 1935. He was in Morzinplatz Concentration Camp from March-April 1938 and then was transferred to Dachau and from there to Buchenwald, where he remained for the entire duration of the war (November 1938 to April 1945). He was liberated by the U.S. Army at Buchenwald on April 11, 1945. His parents and brother survived the war, having escaped to the United States. 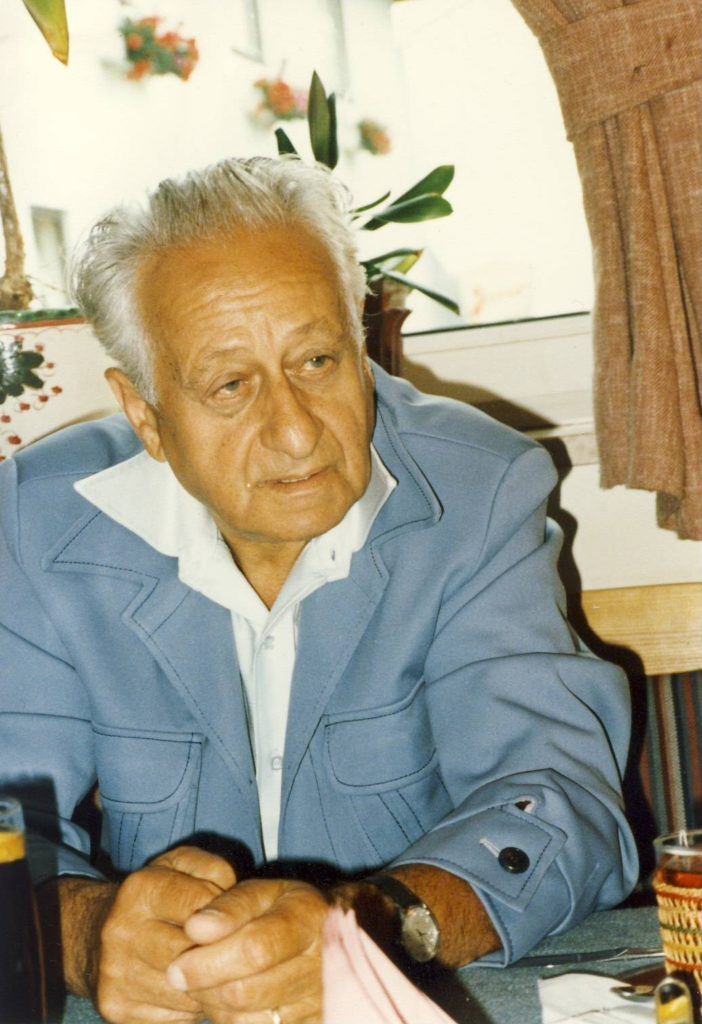 Click on the location markers to learn more about Ludwig. Use the timeline below the map or the left and right keys on your keyboard to explore chronologically. In some cases the dates below were estimated based on the oral histories.

Start Ludwig's Timeline
“[After liberation] I remember, I took a blanket and walked out of the open door into the woods and lay down and read a book, alone.” - Ludwig Scheinbrum

HEDY: You were talking about getting the secret…list.
SCHEINBRUM: I got the list from the office with the names…what they looking for. I got the executive Schmidt, so and so. But the other girls got all the ‘Schmidts’, even though, what they looking for. They gave the Schmidt to me, I have to look this up. Now on account was …doesn’t even mean letters letters…some insurgents in order to ‘ Dear so and so, go out in the garden, somebody is hiding here…somebody is hiding here’…I think it is enough. There’s another time. I worked about a year and I my wife, she worked in the telephone company…listing telephone, but after them…
HEDY: Your wife worked for the American telephone company?
SCHEINBRUM: The same…the same…after then we was coming out 2 from 1… we got married and they said one can…one from many can drop this… not 2 live here. No, I couldn’t. I know a jewelry business, you know… I’ m a jeweler. I got a job from Sassari, as a jeweler, from Yemen and day to day we have to leave. My parents sent me the ticket. And they paid for the airport, my wife she said why don’t we take a little time here… I didn’t see my parents for 7 years. And my brother…got the sense to get out beforehand. He was in Texas he joined the army at Westpoint. One day he was coming to Buchenwald and they found out…I left a day before. He was going to Salzburg with a jeep, he didn’t know I was in Salzburg and I didn’t know he was in Salzburg…he stayed 3 days and left back to Sicily. I finally after they left come around … I stayed by my brother
HEDY: You came to this country when?
SCHEINBRUM: in ‘47
HEDY: And when you came to this country what did you do did you come straight to St. Louis?
SCHEINBRUM: Straight to St. Louis. I stayed one week and I got a job in my business
HEDY: Jewelry?
SCHEINBRUM: Jewelry, that’s all I can do…I still do it.
HEDY: You’re still working, yah?
SCHEINBRUM: Yah, I work a bit.
HEDY: I want to thanks you again, Mr. Scheinbrum, it’s been a real honor to know you, to talk to you. You’re very special.
SCHEINBRUM: When you…If you collect a check from $100,000.00 for the book you can give it to a…(LAUGHS)
HEDY: I’m not going to write a book