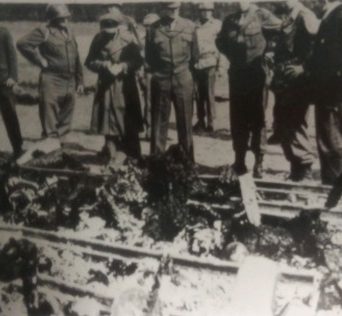 Truman Fulton was a technical sergeant in the United States Army during World War II. His duty was to cook. He was one of the liberators of Ohrdruf Concentration Camp and Buchenwald Concentration Camp. While serving in Europe, he learned to speak five different languages. Truman tells his story upon seeing the camps.

Click on the location markers to learn more about Truman. Use the timeline below the map or the left and right keys on your keyboard to explore chronologically. In some cases the dates below were estimated based on the oral histories.

Start Truman's Timeline
“When we finally got into the camp, the Germans run and we found – I don’t remember there’s six or 700 human beings in that camp and most of ‘em wouldn’t have weighed 90 pounds and that’s the first time I was ever kissed by a living skeleton. And they were in varied states of sickness, malnutrition, death and dying.” - Truman Fulton