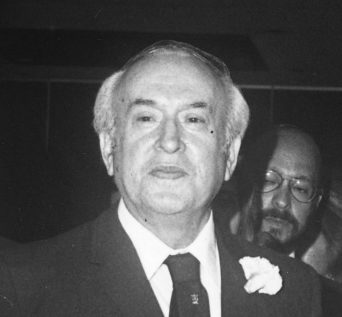 Alexander Schonfeld was born on October 13, 1902 in Hungary/Czechoslovakia. He was raised in the small town of Munkacz, which was 30% Jewish and where his family had lived for over 100 years. He began his recollections with local conditions, including from 1932 to 1942 when licenses were taken away from businesses and professionals and Jews had to wear a yellow star.

In 1944, he and his family were taken to Auschwitz, where they were immediately separated by Dr. Josef Mengele. His wife, mother-in-law, and seven-month-old baby went one way. His baby and mother-in-law perished in the camp. Dr. Schonfeld saved his 10 year old son, Gustav, by saying that he was 16. They were in Auschwitz for 10 days. From there they were sent to Warsaw to clear the bricks from the bombed city.

As the Russians approached, the Germans killed those Jews who could not walk, a total of about 215 out of 4,000-4,500. The remaining Jews were taken on a death march, first to Zychlin, Poland and then by boxcar to Dachau. From there they were taken to Muhldorf, a forced labor camp. The camp was liberated by the Americans in May of 1945.

The Schonfelds were never placed in a displaced persons camp. The American forces sent Dr. Schonfeld and his son to Pilsen and then to Prague. He was reunited with his wife, who had been liberated from the camp of Stutthof in May 1945. From there, Dr. Schonfeld worked in a TB sanitorium until he and his family came to the United States. Many members of Dr. Schonfeld’s extended family perished during the Holocaust. 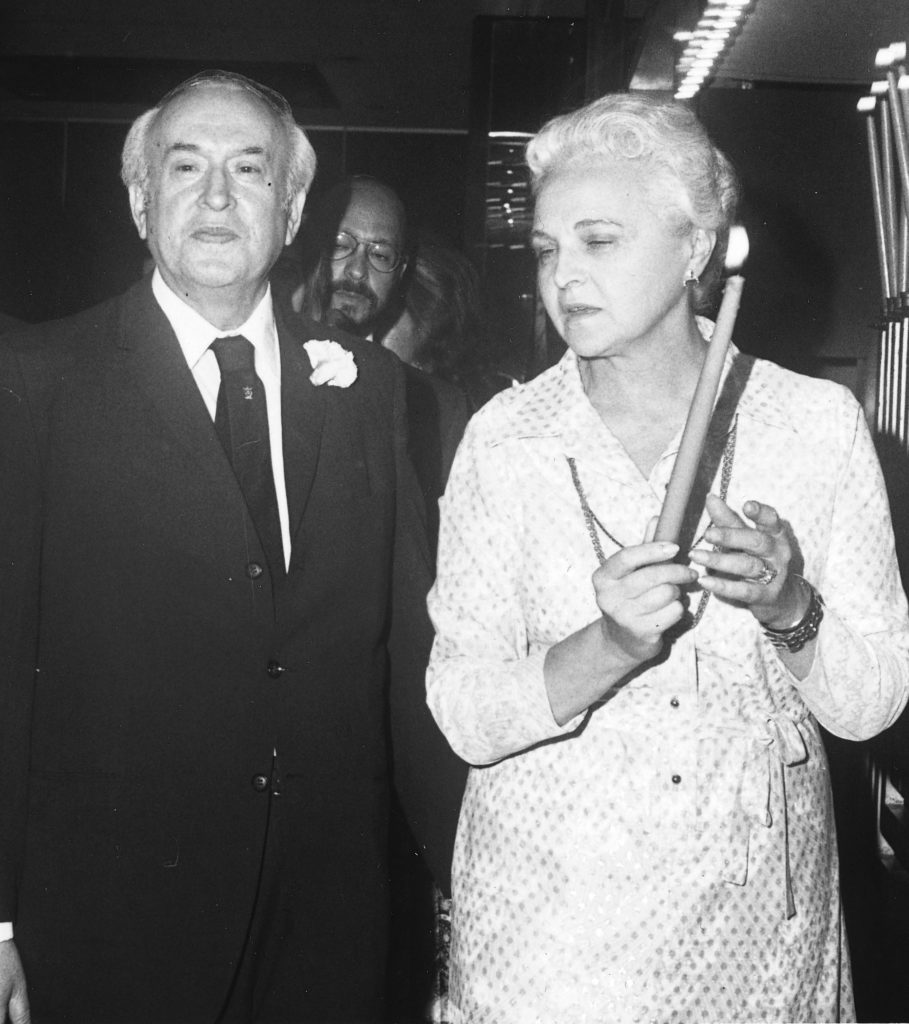 Click on the location markers to learn more about Alexander. Use the timeline below the map or the left and right keys on your keyboard to explore chronologically. In some cases the dates below were estimated based on the oral histories.

Start Alexander's Timeline
“In Auschwitz, we were separated, the women and the men. Here was Dr. Mengele, and he selected the people, one to work and the other one to the gas chamber. I was already selected to the working people... but I saw coming my wife with the two children. She had – one was a little boy seven months old and my other boy was 10 years old. So I took my boy, my 10 years old boy, and between dogs and such things, I took him away to me. I took him away to me. And this is the way how he was saved, see.” - Alexander Schonfeld

SCHONFELD: The little boy was taken over by my mother-in-law. She was 55 years old.
PERRY: Yes.
SCHONFELD: And she went in gas with my boy.
PERRY: All together.
SCHONFELD: Same day, same day they went to gas.
PERRY: In Auschwitz?
SCHONFELD: In Auschwitz, yeah. This was happened in Auschwitz, yeah. Mengele. Mengele.
PERRY: You spent 10 days in Auschwitz before you were shipped up to Warsaw.
SCHONFELD: 10 days, yeah.
PERRY: Did you bump into anyone – did you remember any other people, Jews, that were there?
SCHONFELD: Everybody was a Jew.
PERRY: There was a man I talked to by the name of Herman Schwartz.
SCHONFELD: From Munkacz?
PERRY: No, he was at Auschwitz for three years.
SCHONFELD: We didn’t know each other.
PERRY: Yeah it’s hard.
SCHONFELD: We didn’t know each other’s name, you know. Everybody was the same in the stripe –
PERRY: The striped uniform.
SCHONFELD: The uniform, yeah.
PERRY: Is there any other thing about your Warsaw experience that you would like to tell us?
SCHONFELD: Warsaw – we were in the concentration camp in Warsaw. This was on the Jewish area.
PERRY: Yeah, the ghetto.
SCHONFELD: Not far was a cemetery, you know, a Jewish cemetery – yep, yep – not far from the concentration camp and we were there every day, five o’clock in the morning we had to go out to work. And then about five, six o’clock we came home.
PERRY: What did you eat?
SCHONFELD: In the morning we had a little grass soup.
PERRY: That was in Warsaw?
SCHONFELD: Yeah. Warsaw and Dachau also. Dachau, a little grass soup. Noon time also a grass soup and sometimes they gave a little slice of salami with a little piece of bread and also grass soup.
PERRY: They worked seven days, of course.
SCHONFELD: Seven days, yeah. Seven days.
PERRY: Of course there were no Jews left in Warsaw.
SCHONFELD: Huh?
PERRY: There were no Jews left in Warsaw.
SCHONFELD: No, no, all Jews were already out.
PERRY: And you didn’t see any Poles, of course, because you –
SCHONFELD: No we haven’t seen.
PERRY: You didn’t see the Poles.
SCHONFELD: No, they didn’t let us. They didn’t let the Poles to us and we couldn’t meet no Poles.
PERRY: Let me jump back to your hometown of Munkacz. How many years did your family live there, your grandfather, your great-grandfather?
SCHONFELD: My father was born in Munkacz.
PERRY: How about your great-grandfather?
SCHONFELD: My grandfather was born also not far from Munkacz. It was named Medzinoboz. This is my grandfather. He came from there to Munkacz.
PERRY: So your family lived there in the area maybe a hundred years or more?
SCHONFELD: It was more than a hundred years. I was born in Munkacz and I went to middle school in Munkacz, and then I went to Prague to study medicine.
PERRY: What – when your boy who survived with you –
SCHONFELD: My boy?
PERRY: Yeah. He obviously was old enough to know what was going on around him.
SCHONFELD: Yeah, oh yeah. He was 10, 11 years old.
PERRY: Did he ever speak to you about it at the time, or he was just too –
SCHONFELD: You see, he grew up in America, in American schools. He’s a professor at Washington University, of medicine.
PERRY: Oh, I didn’t know that.
SCHONFELD: Yeah. He’s a professor, a full professor.
PERRY: What’s his specialty?
SCHONFELD: Internal medicine. But he is a – he has a title.
PERRY: A department.
SCHONFELD: A department, yeah. He went to the city school, he had…he came to the United States where he went already in the fifth grade. Then he came to that middle school. The middle school he went in East St. Louis. He went to Chicago to the Yeshiva.
PERRY: Oh, he actually studied in the Yeshiva.
SCHONFELD: Oh sure, I sent him to the Yeshiva.
PERRY: Which one? Do you remember the name of it?
SCHONFELD: Beth Midrash Ha-Torah.
PERRY: Beth Midrash Ha-Torah.
SCHONFELD: Yeah. He studied here until he was 20 years old and then he came home, you know. And he started here at Washington University.
PERRY: Did he get s’micha?
SCHONFELD: He didn’t have s’micha. He didn’t want to be a rabbi. He wanted to be all the time a doctor.
PERRY: Well, you set a good example.
SCHONFELD: Yeah. He studied here in Washington University.
PERRY: This is the end of this section of the interview on 10-28-85.
(End of Interview)