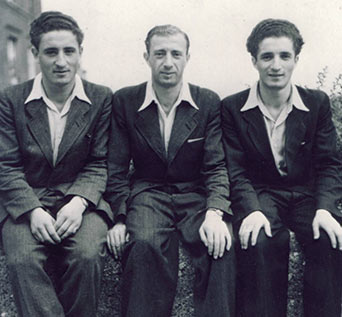 In 1919, Harry Lenga was born to a family of Chassidic Jews in Kozienice, Poland, a small town which had great importance in the Chassidic world. Harry had three brothers and one sister. Harry attended both public school and religious school. His father was a watchmaker who taught the trade to Harry and his brothers. That skill saved their lives during the war.

Harry was living in Warsaw when the Germans invaded Poland in 1939. In 1941, Harry escaped from the Warsaw Ghetto and returned to his family in the Kozienice Ghetto. In 1942, Harry and two of his brothers escaped from Kozienice the night before the Germans evacuated the Jewish population (including his father and stepmother) and murdered all 10,000 of them in the gas chambers at Treblinka. Harry’s father gave the brothers watchmaking tools which enabled them to do watch repair work for the Germans in various camps. As Harry told it, his father bought their lives many times over with those tools.

The three brothers escaped to a Polish-run labor camp nearby. After a few weeks, they were transported to Wolanow, a slave labor camp in the vicinity of Radom. Remembering the camp in Wolanow, Harry described a scene when 117 people were selected on a roll call and shot with machine guns. After that, those selections and killings occurred every Sunday at Wolanow.

The three brothers were able to work doing watch repairs for the German camp commander at Wolanow who set up a private barrack inside the camp for the Lenga brothers to work and sleep. Harry’s brother, Morris, once got typhoid fever and Harry had to hide his brother’s illness from the German camp commander who came to bring them watches in their barrack. Harry also managed to get him medicine by threatening the camp doctor to tell German commander that the doctor’s sister also had typhoid fever.

Harry and his brothers were eventually transported to the Starachovice slave labor camp and then to Auschwitz. A few weeks after his arrival to Auschwitz, Harry was selected to work as a “Sonderkommando,” in the industrial killing operations of the gas chambers and the crematoria. Harry and his brothers had a watch that they earned from fixing watches in Auschwitz, and Harry bribed the block commander to take Harry off the list.

In late January 1945, Harry and his brothers were put on a death march out of Auschwitz. They marched for three days, day and night, without stopping and without food. Then they stopped in a farm overnight and marched for another day to a railway station, from which they were transported to Mauthausen, a concentration camp in Austria.

When they got there, they were given a hot shower and sent outside dripping wet into the icy cold Austrian winter. They had to stand there for two hours completely naked. The brothers hugged each other tightly and chanted repeatedly that only a bullet or the gas chambers could kill them. Harry related that the three of them became hypnotized and stopped feeling the cold.

The next day, they were transferred to Melk, another slave labor camp. The work was very hard; they had to dig tunnels in the mountains with jackhammers. They stayed in Melk until mid-April 1945. Then Harry and his brothers were transferred to the slave labor camp at Ebensee. Harry relates that Ebensee was the worst of all the camps; as the Russian army was closing in, the Germans sent more and more prisoners to Ebensee and didn’t even give them the minimal concentration camp rations that they got in other German camps. Starvation and disease were rampant and the work in the mountain tunnels was dangerous.

All three of the Lenga brothers were liberated in Ebensee on May 5, 1945 by the Third American Army.

After the war, Harry was in several displaced persons camps where he was able to do watch repair work: Ebensee, Austria; Modena, Italy; and Stuttgart, Germany. Before he went to Stuttgart, the Lenga brothers lived on their own in Rome. He came to the United States in April 1949. Harry Lenga lived in St. Louis with his wife and three children, and later had three grandchildren. He continued working as a watchmaker and owned a jewelry store in St. Louis for nearly 30 years before he retired. In 1998, he moved with his wife to Israel. Harry Lenga died on January 2, 2000 at the age of 80.

The Watchmakers, co-authored by Harry and his son Scott Lenga, tells the full story of Harry’s upbringing in a Chassidic family of watchmakers in the 1920s and 30s, and how watchmaking skills and an oath among brothers enabled three brothers to survive the Ghettos and camps in German occupied Poland and Austria. Set against the dark background of the period, The Watchmakers is an uplifting saga of brotherhood, optimism and resilience of the human spirit. Additional book information, photos and violin music from their home town of Kozienice can be found at www.scottlenga.com. 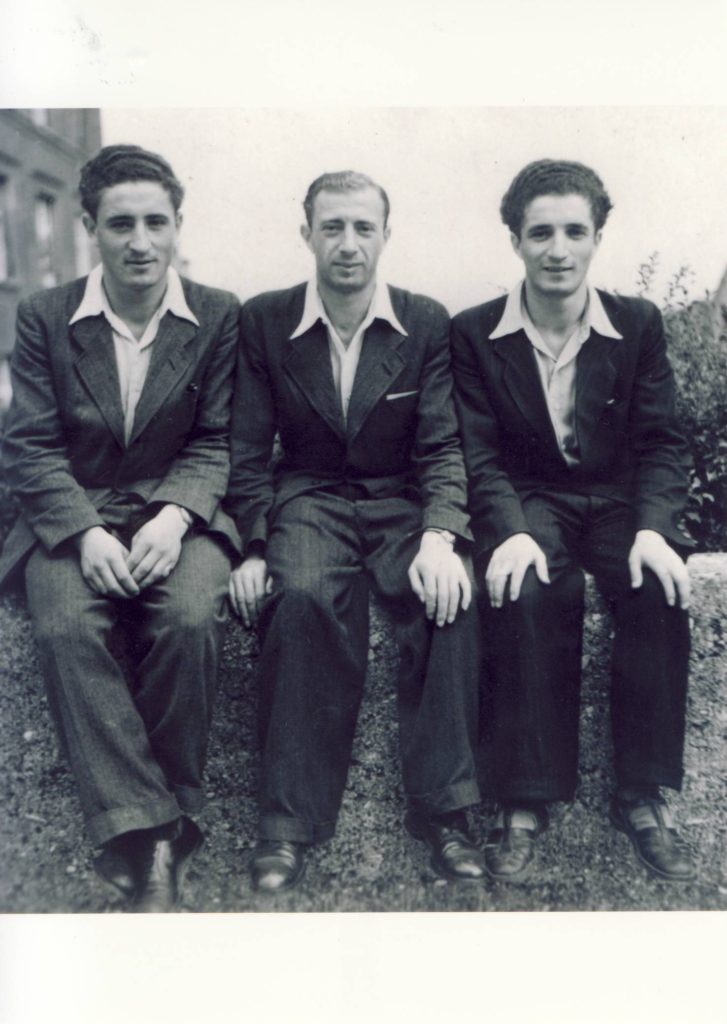 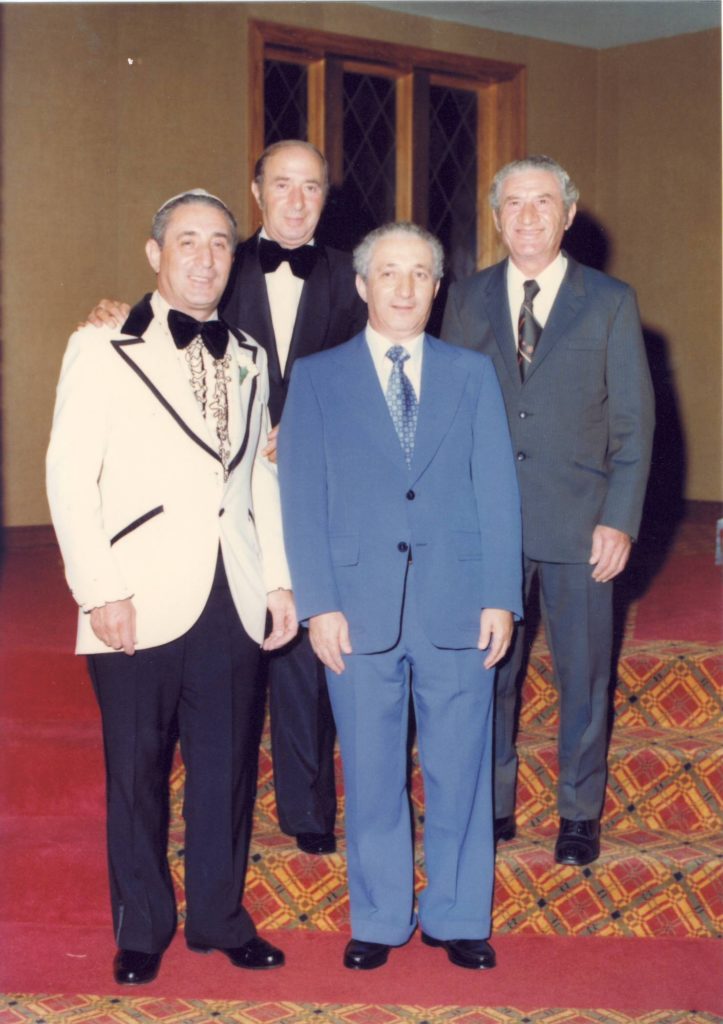 Start Harry's Timeline
“It was the only thing that was on our minds - THEY WON’T DESTROY US - as long as they don’t put us in the gas chamber or a bullet in our body, THEY CAN’T DESTROY US! We’ll have to survive… we have to survive. That’s exactly what we built in our minds.” - Harry Lenga

PRINCE: Well, Harry, I want to thank you. I think you gave a very excellent background and feeling for what it was like to grow up in that type of atmosphere…the Hasidic background and the school experience.
LENGA: My life used to be in the cheder, what do they call it.
PRINCE: Thank you so much.
LENGA: You’re welcome.
PRINCE: Harry, how much do you feel that the Hasidic life or the shtetl life or the very strict Orthodox life helped or didn’t help.
LENGA: It absolutely helped. You growing up as a disciplined human being.
PRINCE: But for the sake of the tape, let me finish the question. …Helped or didn’t help the Jews as they were persecuted by Hitler?
LENGA: It helped in the way of knowing how much you can protect yourself because you were always used to the environment to protect yourself, that somebody is after you. You had the idea already since you were surrounded by enemies, I can say that. It’s different when you completely trust, like an American child who’s born and is free and doesn’t understand all those pitfalls. Then they fall into it later because they don’t know how to protect themselves. In a way we knew how much to protect ourselves and how to endure it. To be able to endure it. It’s a reality we were prepared for. But, of course, we couldn’t endure the gas chambers. If we hadn’t had to go into the gas chambers and be murdered by the millions, a lot of us would have survived, I’m sure of it.
PRINCE: How about the teachings that you learned? How did that affect – didn’t that keep a lot of people from fighting back because of the laws. You weren’t people who fought.
LENGA: Yes, that has a lot to do with it. We were always raised to be humane and not to fight back with, answer with fists, only to try to forgive and forget.
PRINCE: And yet I imagine there are really no answers because no matter who was taught what, Europe was overrun, whether it was France…
LENGA: That’s right, that’s right. In the beginning we thought it was an era which would pass and we would come out of it alive, but we never imagine, we didn’t know what would be, that they would push us into gas chambers. This was something we did not anticipate.
PRINCE: Thank you.
LENGA: We never felt, most of us – although you can always find a handful which were humane people, let’s say. But I – if you give a general picture, if you take it all together, I don’t think that you’d expect too much to have compassion. They didn’t even try to help. Maybe a few cases happened that they were ready to sacrifice their own life, but that’s all you can count them on your fingers. It was not the general idea for the Poles to save a Jewish life.
PRINCE: And now they are oppressed by the Russians.
LENGA: Yes. It was happening many cases when a mother with a little infant came over to a Polish house and told them, “Just take her infant. Raise him as a Catholic or do whatever they wanted, just let him live.” They didn’t even want to do that. And the ones what did that had it in mind, like the clergy. They raised them like in a convent and the idea was to raise them as Catholics – not to save the Jew, only to save the soul.
PRINCE: Sometimes that was protection. We’re talking about…
LENGA: Children. If a child was a male, they had ways right away to see if he was Jewish or not. Only it happened with females. They couldn’t tell about the girls and would have no way to find out exactly and they tried to teach them the prayers, to recite, the Catholic prayers, in case they (the Germans) tried to ask them. They did try. I have a cousin, she lives in New York, she survived being as a Catholic working in Germany. She was taken to Germany as a Polish slave labor, and she lived in a German family for about three years until one time a son came home for furlough and he made passes to her, and she rejected him. Then suddenly, he looked in her eyes – he must have been an SS man – and he said, “You must be Jewish. Only a Jew would act like you do.” That same night he told her that, she ran away. She was lucky, it was close to the end, she got into another family – they took her in. She stayed there and worked in the fields, and she survived. If she had waited until the next day, they probably would have arrested her.