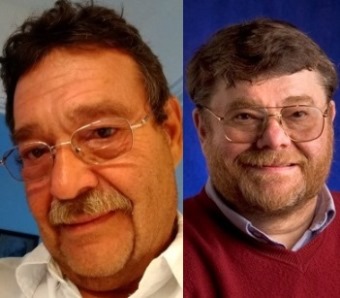 The Asher brothers speak of the debilitating impact of having Holocaust survivors as parents, particularly their feelings of isolation as children and the fear of someone killing them.

Born ten years apart, Sanford and Michael have somewhat different stories of growing up in St. Louis. Together, they went to Sokolow Podlaski, Poland, where their mother, Pearl grew up. They experienced open antisemitism on their visit. This allowed them to have a better understanding of their mother. Their testimony is candid, insightful and chilling. Pearl Asher’s testimony is in our archives.

Click on the location markers to learn more about Sanford and Michael. Use the timeline below the map or the left and right keys on your keyboard to explore chronologically. In some cases the dates below were estimated based on the oral histories.

Start Sanford and Michael's Timeline
“[T]o our parents, life was very dangerous, very threatening and everybody was out to do you damage, whether they were going to cheat you in the store or whether they were going to attack you and hurt you... there was a lot of anxiety that the world was a very dangerous place that could suddenly inflict a lot of harm on you without a lot of reason.” - Sanford and Michael Asher

Listen to Sanford and Michael's Story