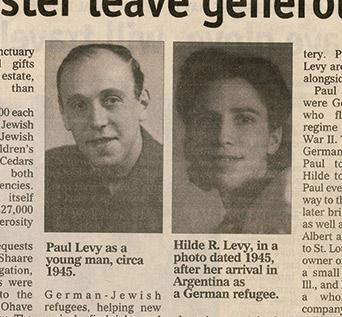 Hilde Levy was born October 28, 1919 in Eschweiler, Germany. Her parents, Albert and Emma Levy, owned a successful small department store and had an older son, Paul. Albert Levy left with the German Army one day after Paul was born and did not return until 1918 because he had been a prisoner of the Russians.

Hilde and her parents were able to escape. They went from their home town of Eschweiler to Berlin, then to France and into Spain on a cattle car. Thanks to connections with cousins, they ended up in Argentina. There they lived in a large German refugee colony, where Hilde’s father obtained money by selling sausages door to door and her mother through darning socks for other refugees. Due to limited income, their main source of survival was money sent from her brother Paul’s employment in the States. Hilde’s brother Paul found employment in New York. He was in touch with a cousin who lived in St. Louis that suggested he come there as the cost of living was better. So in 1942 Paul moved to St. Louis.

On Thanksgiving Day 1947, Paul Levy was able to bring his parents and sister Hilde to St. Louis. He had purchased a home where they all lived together comfortably. His parents died within weeks of each other in 1962. Neither he nor Hilde married, and they lived together frugally in University City, Missouri until their deaths in 2002. To the surprise of the Jewish community, Paul and Hilde left behind an estate amounting to $1.5 million, which they gave to five Jewish organizations in St. Louis. 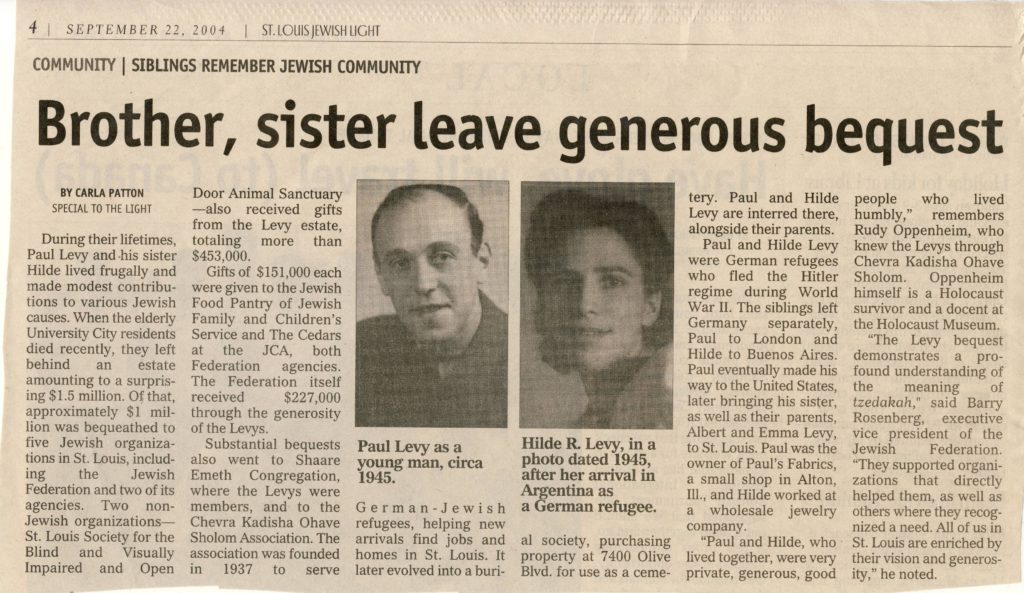 Click on the location markers to learn more about Hilde. Use the timeline below the map or the left and right keys on your keyboard to explore chronologically. In some cases the dates below were estimated based on the oral histories.

Start Hilde's Timeline
“They came into the house... they said we can only take one plate and one cup, a knife and a fork, and some clothes - what you can carry. And outside was a big truck... we went in and they closed the door and we never saw our stuff again.” - Hilde Levy