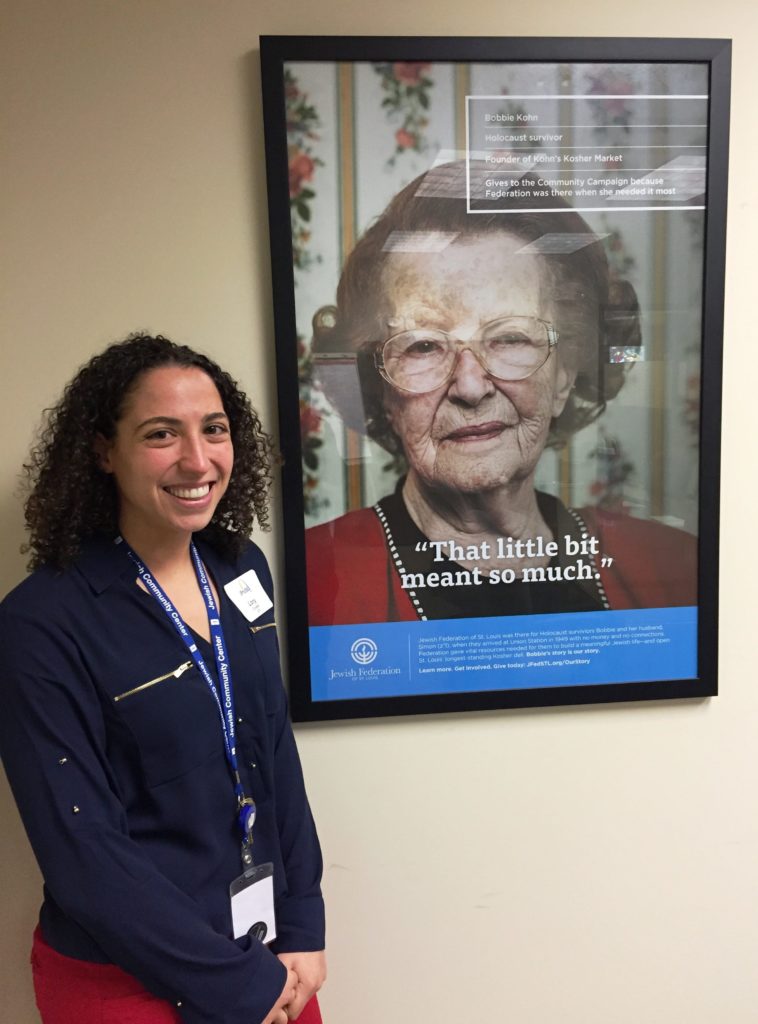 On a Thursday afternoon, I received a phone call from a middle school principal, 60 miles south of St. Louis. He was calling to share that he had two 7th grade boys in his office that day for making white supremacist and anti-Semitic comments. The principal had a discussion with his students inquiring why they made such statements and where they got their information. When the boys indicated they had watched a YouTube video blaming the Holocaust on Jewish bankers, the principal took the opportunity to educate his students on the necessity of checking their sources. As he corrected the fallacies in his students’ knowledge, he noticed they were hungry for information. With this pleasant surprise, he told the boys about the Holocaust Museum & Learning Center in St. Louis and asked if they’d be interested in taking a tour to learn more. They said yes, so he called us.

Friday morning, we casually mentioned this conversation to Holocaust survivor Rachel Miller, who indicated she wanted to be involved and speak to the boys as well. A few emails and after-hours phone calls later, it came together to do the tour that Sunday. From the Museum’s perspective, we were eager for the opportunity to host visitors who might not agree with our mission, yet who were also open-minded to learn more. And for the principal, he wanted to make this happen while the matter was present for his students before the momentum might dissipate. He wrote:

“I’ve talked to both boys, and they are actually really excited for the opportunity, which makes me very happy! This is something that is so encouraging. We love that you and others at the Museum have responded the way you have. It’s not surprising – it’s why I called in the first place, knowing the mission of the Museum and the kind of people who work there – but it’s above and beyond what I could have possibly imagined. So, thank you from the bottom of my heart! Please tell everyone, including your supervisor and Mrs. Miller, how grateful and excited we are for a chance to sow into the lives of these two young men.”

Sunday morning, eight people showed up for the tour – the two students, their parents, another friend, and the principal and his wife. Rachel told her story, making connections to the boys and their lives. For example, she compared the love between her and her sister to one of the students and his baby sister. Upon discussing losing everyone in her immediate family, Rachel asked the students, “Have you ever lost someone you really loved?” As each boy answered with a family member or grandparent who passed, Rachel responded with individual hugs, of which the boys graciously received and returned. She also referenced the video where the boys got their information: “You need to make sure to research all sides, because there’s what you believe, what I believe, and the truth.” Rachel’s presentation concluded with photos of the students, the whole group, and lots more hugs.

After listening to Rachel’s story of survival, I took the group on a tour through the Museum. I told the story and lessons of the Holocaust while also intertwining the survivor stories of my grandparents, Simon and Bobbie Kohn (z’’l). I started the tour by pointing out a picture of my great uncle, Bobbie’s older brother, Moshe Haim Pollack, at his Bar Mitzvah. To help the adolescent boys connect to people from the 1930s, whose pictures may look very historic and unrelatable to modern visitors, I told how Simon liked to skip school and play soccer when he was their age. I talked about how the Nazi’s were great at deception, including how Simon sought going to the labor camp because at 13, he wanted to see more of the world and be considered man enough to do so. And how Bobbie’s cousin, upon arriving at Auschwitz, thought she needed the diapers she left on the train, so as she went back to get the diapers, she gave Bobbie’s mother the baby to hold, and that was the last time Bobbie saw her mother (as the Nazi’s sent children and the parents holding them straight to the gas chambers). After the war, Bobbie was engaged to Simon’s brother, Yanek, but when Polish neighbors killed Yanek and the rest of Simon’s surviving family, Bobbie vowed to marry Simon. They would defy the Nazis by starting a life together and creating a Jewish family. Jewish Federation of St. Louis sponsored the young family and brought them to St. Louis, where the Kohn’s learned English, got odd jobs, had more children, and ultimately started Kohn’s Kosher Meat and Deli Restaurant in 1963. I ended the tour with a picture of my whole family at my Bat Mitzvah, commenting, “what I find so special about my family’s story is that the Kohn family tree should have been destroyed. But instead, my grandparents had three children, eight grandchildren, and five (and counting) great-grandchildren.” The principal then chimed in that while we discuss the six million Jews killed, that overlooks all of their descendants who were never born. After going through the Museum, the group spent time at the “Change Begins with Me” exhibit, learning about the Spiral of Hate and modern examples of bias and genocide, including the recent Pittsburgh synagogue shooting.

After learning about the Holocaust and hearing Simon and Bobbie Kohn’s story, we all had lunch at Kohn’s Meat and Deli, paid for by the Museum. And with that lunch, I emphasized Simon’s belief and practice of providing work to anyone who wanted it, of which today Kohn’s boasts a diverse group of employees who identify as Jewish, Christian, Muslim, African American, Israeli, Palestinian, Jamaican, Asian, and more.

Following the visit, the students completed a survey. They all “strongly agreed” that they “know more now about the Holocaust than [they] did before [visiting] the Museum” and “agree” that “because of [the] visit, [they] understand the importance of treating all people equally.” One student wrote that listening to Rachel was the most impactful part of his visit, explaining, “hearing what the Nazis did to innocent people just because of race and religion and just how tragic it [was].”

For more information about the Holocaust Museum & Learning Center, or to schedule a tour, please visit HMLC.org or call 314-442-3711.