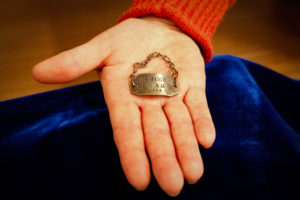 Survivor Ben Fainer, who died in 2016, created the bracelet while imprisoned in a Nazi concentration camp

A long-lost bracelet made by Holocaust survivor Ben Fainer has completed its epic journey from a Nazi concentration camp to the St. Louis Kaplan Feldman Holocaust Museum.

Fainer’s daughter, Sharon Berry, presented the Museum with the unique artifact during an emotional ceremony Thursday afternoon. The 2-inch-wide metal bracelet will be part of the permanent display in the Museum, which is undergoing an expansion that will quadruple the size of the Museum when it reopens in the summer of 2022.

As a teenager, Fainer was imprisoned at Blechhammer, a satellite camp of the Auschwitz-Birkenau concentration camp, where he worked in a metalworks factory. While there, Fainer was able to secretly fashion a small metal bracelet on which he engraved his name and mother’s maiden name, Hannah Urman. During the course of the Holocaust, Fainer lost his mother, along with three siblings and over 250 other relatives.

Before liberation, Fainer had been imprisoned in six camps. On the way to the infamous Buchenwald camp, the bracelet was discarded in a nearby woods, where it remained until the 1990s when it was found during an archeological excavation.

After liberation, Fainer moved to Ireland and eventually to St. Louis, where only after six decades, upon meeting with and becoming best friends with one of his liberators he decided to tell his story to visitors to the St. Louis Holocaust Museum and through his book, “Silent for Sixty Years.”

Fainer was a popular speaker until his death in 2016.

In 2018, the person who unearthed the bracelet was cleaning out his office and saw a photo of the bracelet. He inquired of the Buchenwald Memorial about what happened to it. Only then, did the staff at the Memorial contact Berry, informing her of the bracelet’s existence for the first time. She flew to Germany to receive the bracelet.

On Thursday, she presented it to the St. Louis Kaplan Feldman Holocaust Museum for permanent display.

“It’s a small object with a large story,” said Curator and Director of Education Dan Reich as he received the bracelet on behalf of the Museum.

Reich noted that the bracelet is highly unusual because it was crafted by a prisoner and includes his name and ID number, as well as decorative elements.

During the ceremony, Marci Rosenberg, Museum volunteer and friend of Fainer’s, and Mark Leach, the co-author of “Silent for Sixty Years,” also shared their memories of the late Holocaust survivor and frequent speaker at the Museum.

After Berry received the bracelet in Germany, she knew it belonged at the St. Louis Kaplan Feldman Holocaust Museum.

“It’s his identity in this piece of metal,” she said. “This is my father’s story, and it needs to be continued to be told. This is how it’s going to be told for generations.”