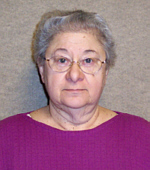 “I have lived under every political government that exists on earth. Roumania, where I was born, was ruled by King Carol. In 1938, the Nazis occupied the country, followed by the Communists in 1943, and then I was repatriated to the United States, since I was an American citizen living in Roumania. During the Nazi regime, the soldiers came for us one night. While our maid was at the front door telling them that we were not home, she was prompted by my mother, who took our coats off the hangers, and we ran out through the back window and went to my aunt’s home.

The next day, my mother went to the Swiss Legation, which took care of all allied citizens, and told them that the soldiers had come for us the previous evening. Someone from the Swiss Legation called the police and told them that we could not be touched, since we were American citizens. My mother, my brother, and I were fortunate. The only things that we had to endure were the prejudice, the air raids–which came twice a day–and, of course, the hunger.”

Bea Wyllie passed away on March 12, 2017. May her memory be a blessing. You can listen to Bea talk about her experiences through the Museum’s Oral History Project.

A Letter to Mama

A Trip to New York