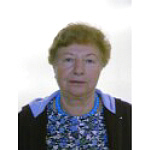 “I was born in Wyszkow, a small town near Warsaw, Poland. When WWII started on September 1, 1939, and our town was bombed out and Jewish people killed, we managed to escape to the Polish eastern border. By September 15, 1939, the area we escaped to was occupied by the Soviets, who let us in and then sent us to their northern uninhabited area (Komi Autonomous Republic) to a hard labor camp. It was there that my mother died of typhoid, my father perished, and my fourteen-year-old uncle was in charge of two little children, my brother, 3, and me, then Faiga Smolarczyk, 4.

I was moved from orphanage to orphanage until the whole orphanage was moved to Poland after the war, where, in 1948, I ended up in a Jewish-run orphanage in Lodz. Later, I studied history in Russia at Leningrad University (I graduated in 1960), and I also hold an M.A degree in English from Warsaw University. I came to the U.S.A. in 1966 and taught Russian and Polish in several colleges. I have two daughters: Anna Wertz–who graduated from Washington University and earned a Ph.D. in history from the University of California at Berkeley–and my younger daughter ,Melanie Wertz, who earned her B.A from Swarthmore College and an M.A in mathematics from Columbia University in New York. I am retired and devote my time to the Russian Oral History Project (at the St. Louis Holocaust Museum and Learning Center), under the guidance of ‘Sister’ Prince.”

You can also listen to Felicia’s story as part of the Museum’s Oral History Project.

My Brother Enoch, Found and Lost