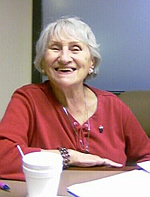 “I was born Feb. 4, 1922 in Slovakia, then the Czechoslovak Republic. I was taken to Auschwitz and Auschwitz-Birkenau in April 1942, and, in the summer of 1944, by the grace of God, was put on a transport to a special ammunition factory in Upper Silesia. The Russians were coming close, and we fled on foot in a number of death marches and in cattle wagons and open coal-wagons. From January to April 1945, Allied Forces bombed from the northwest, and we fled again towards Hamburg. With the help of the Danish Red Cross, we crossed the German border to Denmark on April 29, 1945. We were liberated by the Swedish Red Cross on May 2, 1945, having suffered horrendous loss and having turned into walking skeletons, barely alive.” You can also listen to Hilda’s story as part of the Museum’s Oral History Project.

A Commitment for Yom Hashoah

A Prayer for Answers

In The Garden of the Righteous