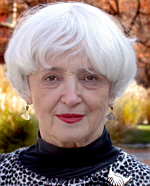 Miriam Spiegel Raskin is a St. Louis-area resident who has lived much of her life under the shadow of the Holocaust. Her writing often reflects her childhood experiences as a refugee from Nazi Germany and her subsequent reflections on the War Against the Jews that her Fatherland undertook. She has published a book of such writings under the title Remembering and Forgetting: A Memoir and Other Pieces of My Life. Other works have been published in the St. Louis Jewish Light, the St. Louis Post-Dispatch, Simcha Magazine, Sagarin Review, First Harvest: Jewish Writing in St. Louis, Natural Bridge Literary Magazine, and other publications.

Who Does Not Want to be Perfect?